Posted on April 15, 2015 by Trueworldtravels

Riding through the hills is full of all types of encounters. Villagers are hard at work everywhere I go. Groups of old guys saw big pine trees into boards on custom platforms. They use massive saws with one guy above and one below. One guy told me, with a big grin on his face, they only have to pay one thousand rupees ($16) for each large pine tree they cut down. 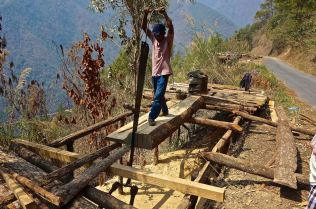 Some of them are really good size. He asked if I had a rosary, and since I didn’t he gave me his.

I wore it all day, but I took it off before I went to the Baptist church that evening. I didn’t know if they wouldn’t like it. Small sections of road work are going on in random places. It’s tough work in rough conditions and there are old women working alongside the men. Sometimes it looks like a family affair all around the site. One of the pastors told me that these workers were probably making about $3 a day. 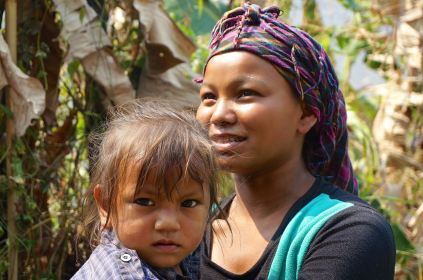 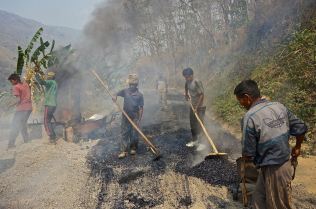 The most tedious work I saw was groups of people at piles of large rocks. They were chipping them by hand with a hammer into smaller sized chunks for road construction and then making these neat rectangle piles. I think I would go mad doing this day after day. I know I would.

Old men trudge along dragging themselves and their loads slowly to their destination. The older ones always have the biggest brightest smiles and they don’t show one bit of feeling sorry for themselves. They carry loads that a lot of young people couldn’t lift for five seconds. They always like to pose for a picture and put on their serious face.

I stumble across kids in random places all the time. A lot of the time just playing in nature, crawling around in the dirt, and playing games. If I have any food with me, I’ll have a snack break and share with them. Hooking them up with some food is always a good way to let them know you come in peace. When I met this group, I still had the apples that Alison had given me so I gave them away. They devoured a whole packet of cookies and scampered away towards home with the apples. 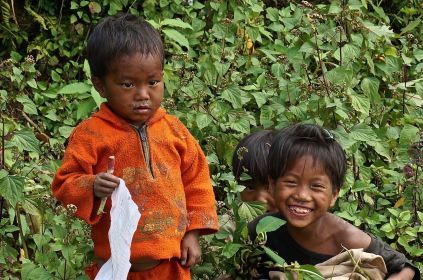 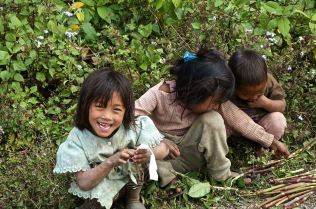 The Indian government has begun a campaign to fill the roads with dorky sayings on concrete blocks. Most of them are trying to remind you not to kill yourself driving like a dumb ass. The locals might not have noticed them yet because they all drive with a death wish. The jeeps fly around blind corners in the wrong lane. Riding a motorcycle, you don’t have any rights and better get out-of-the-way.

They had random ones that talked about “bro”.

I made it thirty km short of Mon to the village of Aboi. It was a tiny place and by the time I reached the church, I had an entourage of young boys following my every move. Eventually I found a house across the street where some of the churchy types were hanging out.

A nice group of older fellows welcomed me in. I ended up playing on the tablet with my entourage for at least an hour. We had to take a picture of each one of them and then put them through the mustache, bald, beauty, aging, and fat booths.

They gave me a bed in their guesthouse. A young girl who lives at the church and is in charge of women affairs cooked me an amazing dinner. She and her sister were super sweet and worried about it not being a good meal. Before going to bed, a tiny man showed up. Everyone is short in the hills, but he was extra miniature. He reminded me of Hank’s dad on King of the Hill, but younger. He even had the same waddle. A nice man, but a bit strange.

His english was pretty bad, so a conversation wasn’t easy. A lot of the time he would act like he understood what I was saying, but I could tell he had no idea and just didn’t want to look bad. This time of year the first light is around 5AM, and the sun is up at 5:30. Because of this, I’d been getting up early everyday, but it didn’t mean I like having someone calling my name at the door first thing in the morning. I ignored it, and then a little while later went out and found a beautiful spot looking out over the morning sun on the village and hills below. Just as I started reading a book, here came my tiny amigo proclaiming “it’s already six o’clock come with me”, as if I should have been prepared for it. He took me over to his house and I spent a couple of hours with his family before the food was ready.

After a big meal it was off to Mon. Somebody told me the day before about a place called Lungwa. They said it was an “international trading center”, that tons of tourists went there, and you could go into Myanmar with no problem. I’ve learned not to trust anything an Indian tells me. If I ask three guys how long it will take, I’ll get three very different answers and all of them will turn out wrong. I think they just don’t want to look bad and not know something because the way they say it is always mater of fact and confident. I still like to get ideas though, and even though I was sure it wouldn’t be anything like he described, I was still interested. When I got to the town of Mon, it was the biggest place I’d seen in a while, and I wasn’t feeling it, so I kept driving to the turn off for Lungwa. For forty km the road snakes over one steep ridge and then drops into a valley before climbing steeply to the high peak that separates the two countries.

The final section is very rocky and steep. I drove the road till it ended overlooking Myanmar and a small foot path that led on. The Indian roads department claims they would have kept building if it wasn’t for those pesky borders. After riding the last week on their roads, I think they have plenty of work to do at home.

Looking out over the border area, I was thinking a lot of stuff must be smuggled over it. All that opium from Myanmar has to go through somewhere on its way west and turns out I was hot on the trail. In the little village my GPS showed me in Myanmar. I stopped for a minute and a couple of guys came up with all the kids. They spoke english and one of them had an awesome necklace with two giant teeth. He told me they were tiger and that he got it across the border. I asked how much and he invited me into his house and to a smokey room with dim light, which was filled with old traditional Naga things, like statues, skulls, and big knives.

On the wall were a collection of very old guns. A few old men sat dazed and around the fire with bloodshot eyes. I wasn’t really interested in the necklace, but his dad wanted to know what I’d pay. He put it around my neck and then started cooking up some opium. For smuggling purposes it’s on clothing, which is cut in strips. I have no idea how they get it on the material. In a big spoon he boils water and the strips over the fire while poking and stirring and stirring. Eventually the water evaporates and he’s left with pure opium. Another guy cuts up bunches of some type of leaf, soaks it in water, squeezes all the moisture out, and then dries it over the fire until turning brown. They roll this dried stuff around in the spoon to soak up all the opium. Then with some fancy homemade bamboo bongs smoke bowls of it. 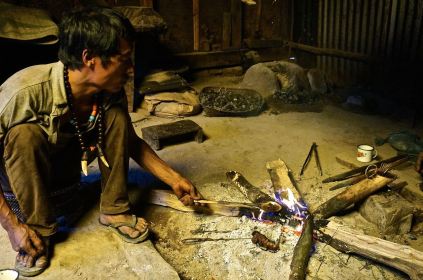 He gave me three big bowls and sent my body to the clouds. All those aches from riding melted away, my joints popped, and my muscles fell off the bone. I was actually pretty mellow. The young guy told me that the older guys were addicted. We shared cups of hot black tea cooked over the fire. I threw a really low price at him, and before I left he motioned to me that it was enough. I don’t think it’s really tiger. Probably wild boar is my guess, but super unique.

I made it back down to Mon after a very relaxing ride and went to the Baptist church. The massive church had some kind of service going on. One of the first guys to come over in the parking area to greet me was a nice soft-spoken man with ok english. He took me under his wing, and once he realized I didn’t want a hotel, said I could stay at his place right down the hill across from the church. There was a big table full of food and after the big shots ate we got to clean up the scraps. The guy I was staying with is a helper at the church, which they call a peon. I always thought of that term as a bad thing, but he embraced it. It was a strange night with all the peon fellows. They chopped up pig legs and feet for a soup. A big bowl of old nasty looking chicken legs and feet was finely chopped with the leftover meat for a big meatloaf type thing. Luckily that was all for another day. They gave me a small room attached to their house and I fell asleep to the entire family in loud prayer. The day had come to leave Nagaland, and the hardest part was making it out of the hills in one piece (mostly). I chose a route out to Naginimora and Simalugiri, which mostly looked alright on my map. I asked a few people in town and all of them assured me it was a good road. Never trust an Indian’s advice. The first section of around 40 km, which wasn’t even on my map, was probably the best part. I’m not saying it was a good road, but better. Much of it was sealed, but many spots were torn up and full of large potholes. 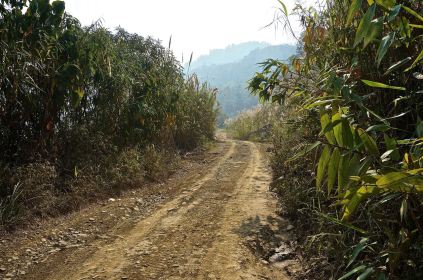 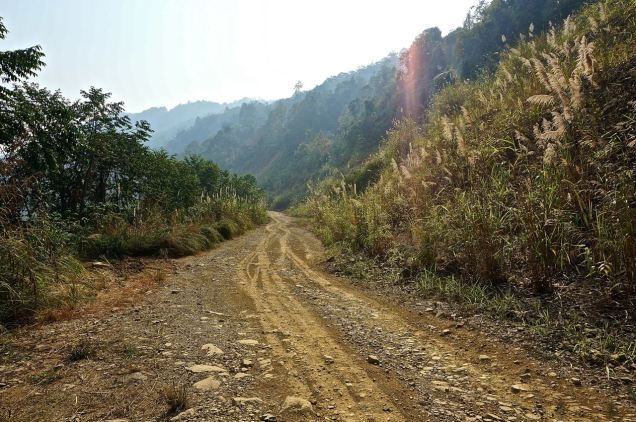 I was looking forward to getting to the main road in Wakching that everyone had talked about. I found the road, and it kicked my ass. I made it down, but it was brutal. It started out as just easy gravel road, but gradually disintegrated. They have a massive coal mining operation going on covering the entire side of the mountain and it has completely destroyed the road.

A lot of sections had thick layers of fluffy dirt over them, which was like riding on sand. The guys in Mon also told me that many people drive this route. For two hours I never saw another car. Once down to the city I was aiming for, it still took awhile to get better. Hundreds of massive trucks are flying around the area and moon crater potholes cover the roads. The worst part was the dust, which was blinding and smothered everything. I was pretty relieved to make it out in one piece. Going down the road, I heard a noise, but thought it was just the metal cases talking like they sometimes do. I pulled into a small town and was going to ask about a bolt I needed and luckily I noticed a little problem. All the slamming around coming out caused one of the arms to break on each side of the pannier frame. Goodbye Nagaland, hello Assam.