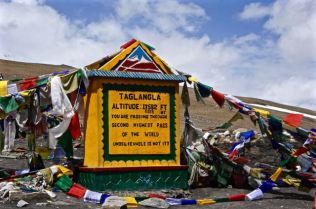 After crossing the Baralacha La, you come down into an open plain with still water, which reflects the surroundings. The landscape begins to take a different tone.

After riding through a narrow slot that looked like mars, you come out onto a big plain. With the skies morphing into many different shades and the landscape blended full of colors, it was a gorgeous site 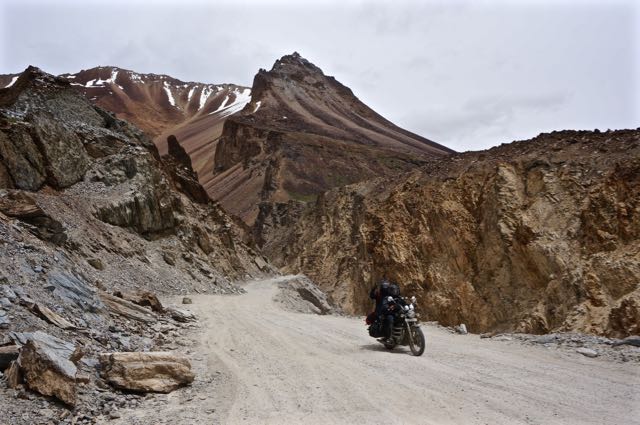 Here’s where I met the BOM crew from Bangalore, which became a good friendship and always good times when we bumped into each other. Good smoke always in the air.

This was one of my favorite stretches. Everything about it was like a movie scene. If I was a director I would try to go film my movie in this region. It’s epic.

Climbing up off this beautiful plateau takes you around over twenty hair-pin turns towards the next pass. On the way you go by Nakeela at 15,547 ft (4738m), which isn’t quit the top. A bit further up the messy road takes you to the third pass on the Manali to Leh section. Lachung La is up at 16,616ft (5,064m). The first five thousand meter plus pass to drive over. Another step up the stair-case. 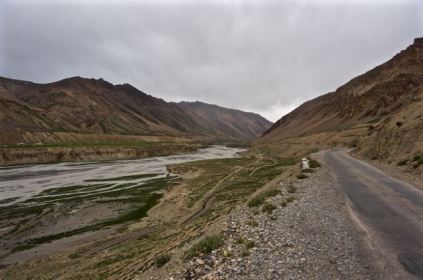 The other side leads you into a narrow orange-rocked canyon with a small blue-gray river flowing through it. The dusty road follows along the edge until the river drops down via a long waterfall. All of a sudden the river is far below and you are driving on a sheer cliff. Driving along these is a bit exhilarating while hoping that no boulders happen to break off as you’re underneath. 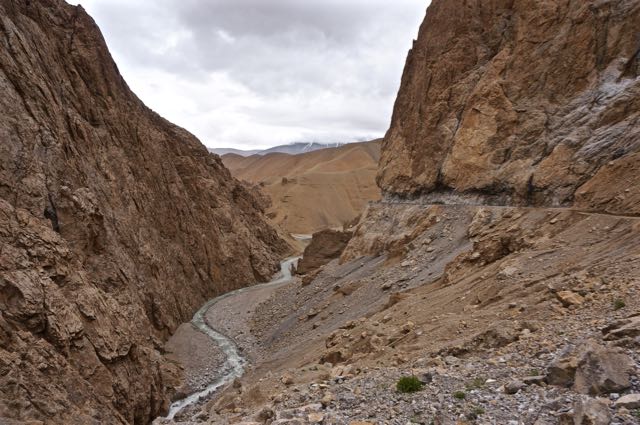 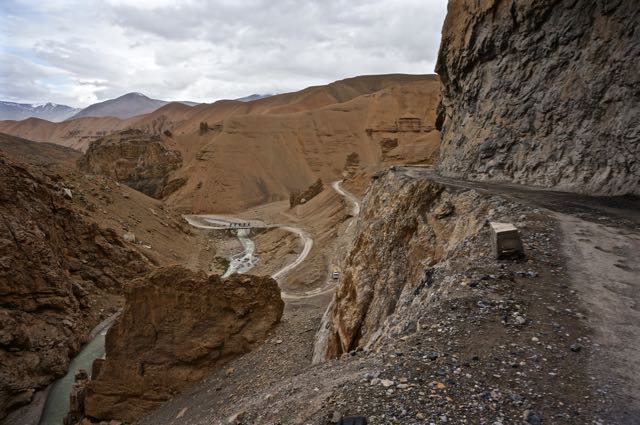 Winding your way down this nervous perch takes you into the tiny summer settlement of Pang. The Ladahkis/Tibetans come up from the Ladakh valley to open little roadside restaurants and store with beds in back. A smiley group of people with a laid back attitude. The chai and thukpa is hot and delicious. At 15,280 ft it’s extremely cold at night. Probably the coldest night I had in the entire region. I camped along the road next to some rusty old drums. 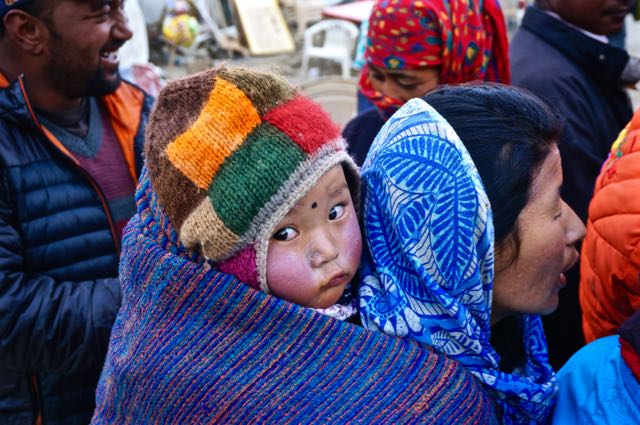 The most excitement I’d seen in awhile was when an Indian guy showed up with a trunk full of solar lamps. Such a small thing is a reason for celebration up there. The road twists up out of this valley and slowly gives better and better views of everything around you

Huge rivers cut through the plain . Once agin I felt like I was exploring another planet. The  immensity of it all makes you feel very small. Kind of the same feeling as floating out in the middle of the deep blue ocean.

Once up onto the plains, it’s the first time in what feels like forever that you can get into the higher gears and open the throttle up. Long flat stretches of perfect asphalt glide across the plateau. This is what will lead you towards the second highest motor-able pass in the world.

As I rode up into the landscape, I sang Stairway to Heaven by Led Zeppelin as loud as I could. It was stuck in my head the whole way up. It fit perfectly with everything around me. 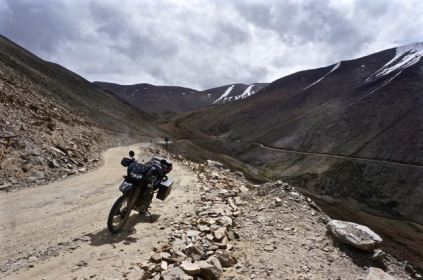 I love this photo. You can see the road cut right into the side of the mountain with the scattering of shadows from the clouds.

One of the most amazing things was riding on a perfect asphalt road at over 17,000 ft. I trekked for weeks in Nepal on rough tracks to get to elevations like that.

At the top are buddhist prayer flags flying in the wind around a small shrine. You’re now at the top of Taglang La, 17, 582 ft (5358m), which is the second highest motor-able road in the world. A pretty amazing feeling looking out from the top, and a pretty difficult place to catch your breath. 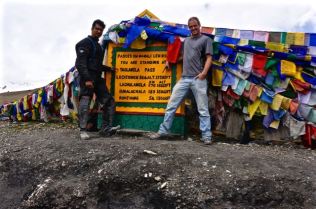 The other side heads downhill all the way to Leh. A lot of that elevation you worked so hard for is given back. The first section is beautiful as it winds out of the peak and down to the river below. The snow is left behind by a series of hair-pin curves.

Once down to the river, the greatest thing in the world is soaking your feet in the ice cold water flowing off the mountain sides. After three amazing days, the route leads you into leh, which has many cute little guesthouses run by friendly families.

An extra day had to be spent in Leh to obtain the special permits for the areas I wanted to go to, which was nice to have some chill time. I got the permit for Khardung La, Nubra Valley, and Pangong Lake. Indian nationals don’t need them, but foreigners do. The adventure was underway with the best still to come. Leh is in Ladakh and in the Indus River valley, which is the backbone of the Ladakh range. It’s a desert mountain lanscape with lush green areas where the cities lye. It’s a pretty remarkable thing to see. This area has to be one of the roughest areas in nature to live. The colors all contrast each other in a magical way. 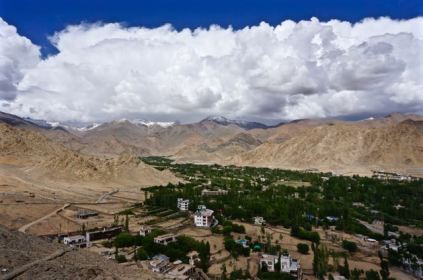 From the top of the Shant Stupa, which overlooks Leh, there are views out over the entire valley and mountain range peering over it. 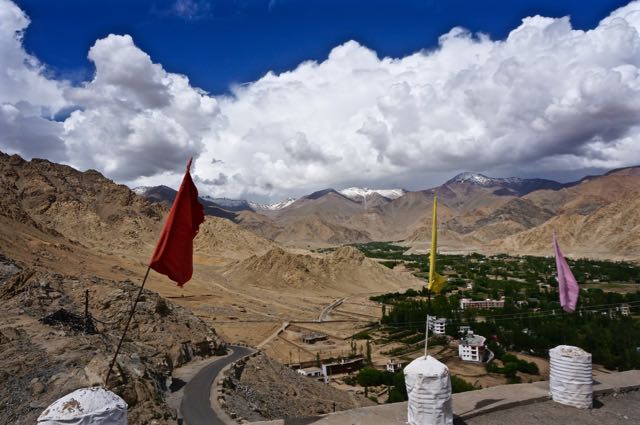 It’s the perfect spot to look out over the landscape and contemplate the road that got you there. To think back on the adventure that led you to this heavenly place. 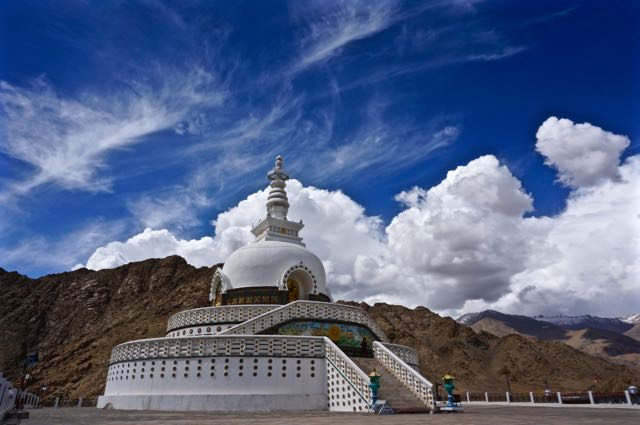