Leaving the beautiful Ladakh Valley for the lowlands

Posted on August 22, 2015 by Trueworldtravels

Once back to the Leh-Manali highway, I had to choose which way to get to Pakistan. The decision ended up being made for me by some pissed off taxi-driver mobs. I could either go back south the way I came via Manali or head west towards Srinagar and follow the Pakistan border all the way down to Amritsar. When I got back down to the main road from Pangong Lake I was going to go the Manali route, but needed to get some petrol about 5 km the opposite way. At the intersection of the highway there were groups of young guys blocking the road and many trucks and tourists standing around their vehicles. They darted in front of me and aggressively said I needed to pull over and that a strike was going on. Apparently the taxi drivers of Leh were on strike because of the Manali taxi drivers bringing their customers up and then showing them around instead of them getting the business. There’s no way I was going to waste my time sitting with them all day so I acted like I was parking on the side up ahead and then gunned it. I heard screaming behind me and could see them picking up things off the road to throw at me. Looked like I’d be heading to Srinagar. The gas station was also shut down because of the strike, so I had no choice but to head to Leh. The highway was creepily empty most of the way with only a couple random military vehicles passing me. I had to navigate a few more road blocks before getting to the gas station. Two of them weren’t too bad because most of them were young and looked a bit intimidated of me. At another they were pretty insistent that I park. Around a bend in the road next to a huge monastery on a cliff, a gob of vehicles were strewn all over. A group lined up in front of me and demanded I pull over. I had to slap a few hands away from my keys. One of them spoke good english and was the only one with a hint of sympathy for the situation. I reasoned with him that I wasn’t part of the strike and I had a long drive that day. He kept insisting I park for only ten minutes. I didn’t believe that for a minute and as soon as their attention was shifted to another guy behind me I flew off as fast as I could with screams and hollering trailing behind. I managed to find some fuel and in the city there weren’t any road blocks to deal with, but on my way out I had a couple. The last one was the sketchiest. At the entrance to the airport, a large mob was gathered stopping all vehicle traffic along the highway and out of the airport. They wanted absolutely no traffic on the road. A couple of them stood in the middle acting like the top dickheads. I could see a couple military guys off ahead of me and felt brave. I slowly drove into the area acting oblivious to the guys yelling at me and then full throttled it. As I went by I saw them picking up rocks. A couple came bouncing by me. I passed one guy as he cocked back his hand with a fifteen pound chunk of rock, but thought better of messing with a foreigner. Now I was finally free to make my way through the incredible landscape. 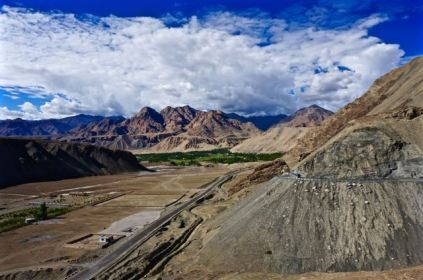 The contrasting colors of the reddish-brown rock, green valley floor, white monasteries, and blue sky bulging with clusters of clouds was amazing. I forgot all about the craziness getting out of Leh. It only got better and better as you gained elevation.

The river is full of power this time of year from the glacial melt. 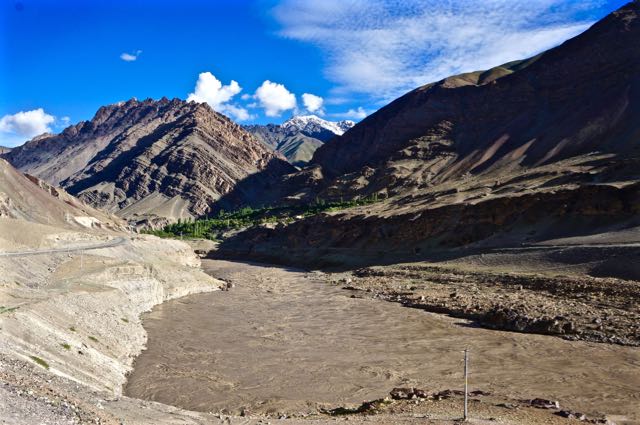 Lots of fun roads skirting the cliffs hoping for no more slides. 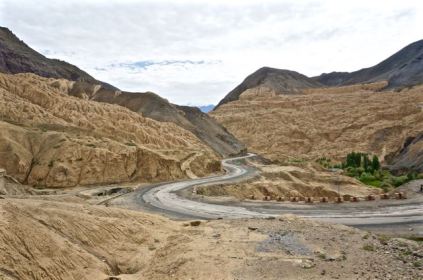 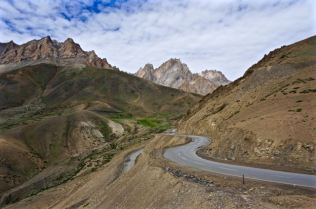 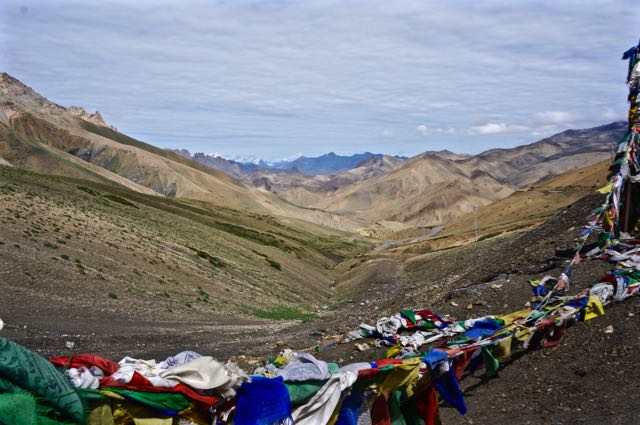 The highest pass on the Leh to Srinagar route is just a baby compared to the ones from the previous week. 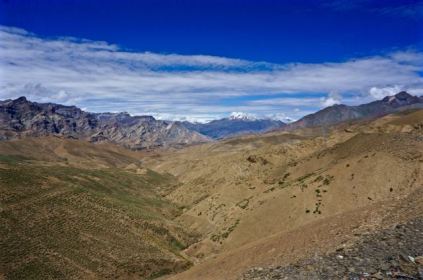 The route runs right along the Pakistan border at one point. 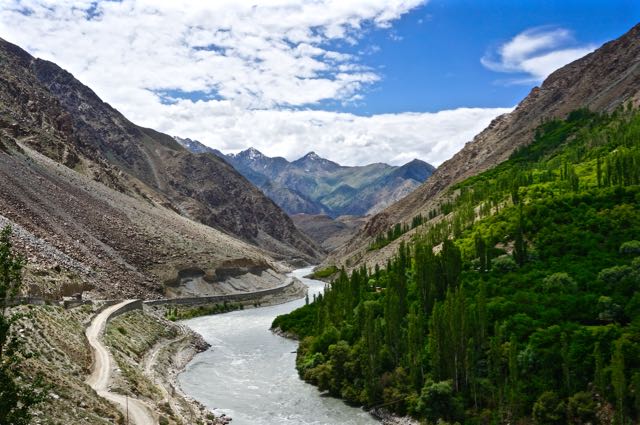 Looking across the river you can see Pakistan. 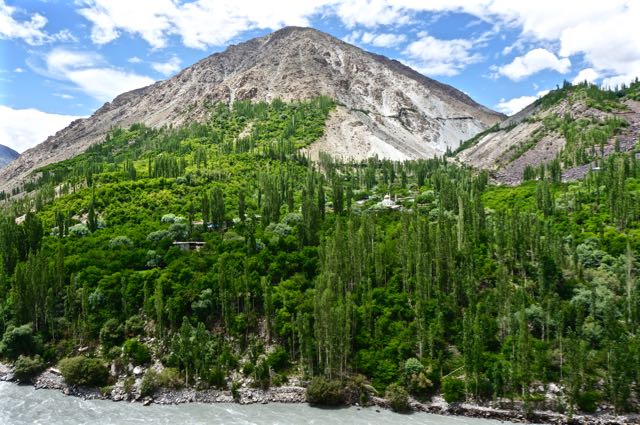 It’s an area with a lot of tension and history of war. 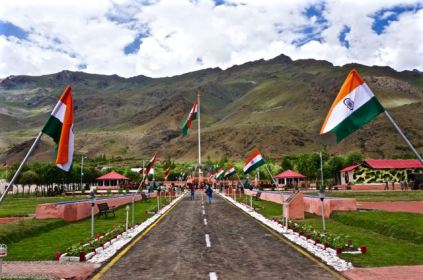 Indian drivers win the gold medal for worste drivers in the world, hands down. 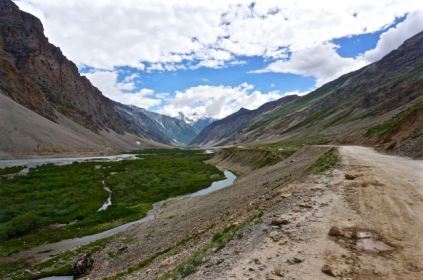 Leading up to the final pass, you pass huge areas where the nomads are living for the summer months with their herds.

This section or road might be oner of the sketchiest I’ve ever riden on in my life. It’s literally built right on rock faces with thousand foot drops.

I got lucky and made it through. It had been closed for days because on slides and it looked like more would happen any minute. Hundreds of trucks were stuck.

The valley you drop down into is stunning. Thousands are making an annual pilgramage to the area and fill the area with colorful tents. 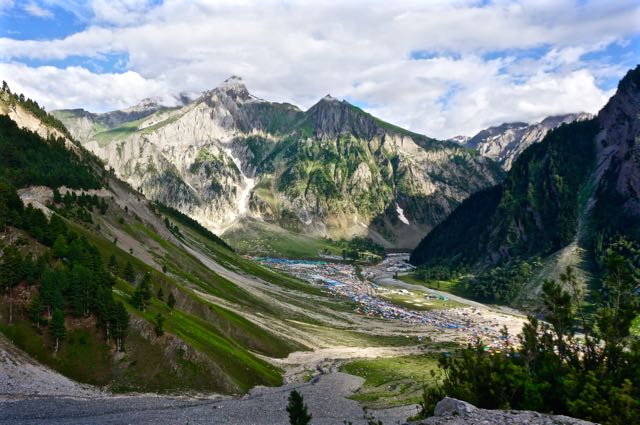 Another one of the slides that closed the route for days. It took a bus off the road and carried it all the way down to the river. 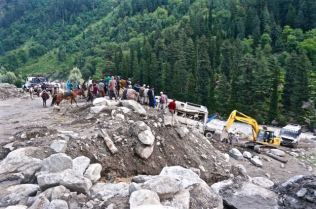 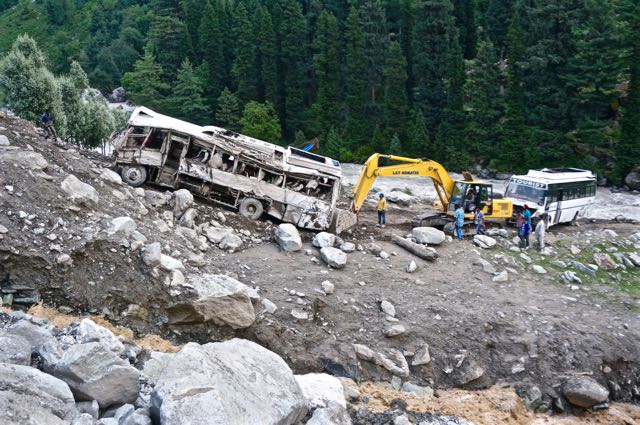 My final camp in India in an abandoned house looking over a gorgeous river.

India had come to an end as I sat in Amritsar. The next morning I would cross into Pakistan. I’m actually out of Pakistan now, but it was so good I didn’t have time to get on and post anything. A great country coming shortly.

3 Responses to Leaving the beautiful Ladakh Valley for the lowlands