Posted on September 17, 2015 by Trueworldtravels

Some days you wake up expecting something wild and fun to happen, and sometimes it comes out of nowhere. When I climbed on my motorcycle in the morning, I didn’t expect to be shooting an assault rifle into the lake that afternoon. Days later, I packed up camp without the idea of drinking myself stupid for a couple days with a Kyrgyz family at their lake house. Traveling creates the most random situations you can dream of.

After a night at the lake, we went our separate ways, but it was short-lived. Half-way around the south-side, the map shows a campground symbol not far off the road and way away from any civilization. I went down the dirt track to check it out and I wasn’t alone. Ben and Sofee were there along with two cyclists we’d stayed with the night before. Fifteen minutes later, Dave and Ghi Ghi came rolling up. All of us except for Harley had managed to end up in the same spot, and what a spot it was. It’s a nice little beach with perfect flat areas for camping right by the water. 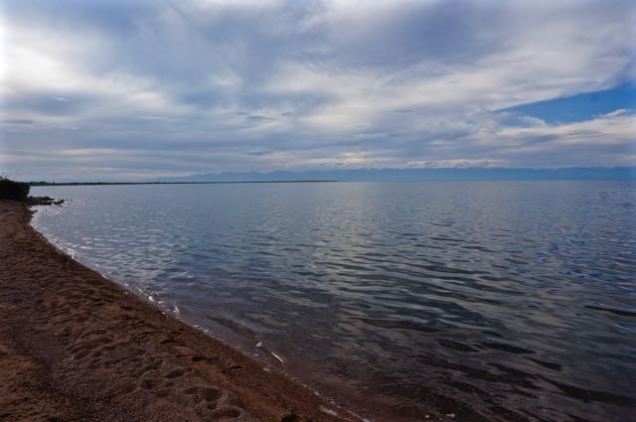 There’s nothing like swimming in a lake and looking up at snow-capped peaks. We had it all to ourselves apart from the big group of Russians just down the beach at the neighboring camping area. A guy from their group with a massive belly came over and invited me and Ben over to their “Russian sauna”. Turns out they had been camping there for a few nights and had a pretty wild time. Vodka bottles grew out of the sand everywhere. Their Russian sauna was a genius invention. They had a small fire with mostly coals left smoldering, which was surrounded by stones and concrete blocks. To get the sauna going we huddled around it and pulled down a big piece of camouflage material around us, which used to be part of a tent. The hot air quickly filled the tent. A bottle of water generously doused the stones and took the temperature to another level that burned the skin. Everyone looked at each other yelling and laughing, and trying to handle the burning sensation. Just when we couldn’t take it anymore, the tent was thrown off and we sprinted down and dove into the lake. A few times of doing this gives you a big rush. After the third time, with the adrenaline going, one of the guys asked if we wanted to shoot a Russian Kalashnikov. Ben quickly said no and I about jumped out of my pants with a yes. The Gopro video of what unfolded next was priceless. He went over to their van and grabbed a black case and slid it out. Then he picked up a giant clip, popped it in, and cocked a shell into the chamber. Mumbling with a cigarette hanging off his lips, he led me down to the lake and told me “two shots”. I shot a couple of rounds into the lake, and it was really difficult to hold back and not unload the entire clip. They were pretty jolly and easy-going, but looked like the kind of guys that could flip a switch fast. My imagination was telling me they were Mafia dudes from Bishkek. They were a fun bunch, but we were a bit relieved when they took off and left us with the beach to ourselves for the night. It was such a fun day hanging at the beach.

My hearts been missing the ocean and I’m a long way from getting to it anytime soon so it was a nice substitute. Another pretty sunset over a lake, check.

Luckily there were a couple little stores nearby and we went on a vodka run. We stayed up late around a fire a few meters from the lake drinking everything we had and burning every scrap a wood we could forage. It was a sad moment when we couldn’t keep the fire going any longer and had to crawl into our tents. We had been wanting to have a nice fire on the cold nights, but never had any wood. It couldn’t have worked out any more perfect. The soft lapping sound of the lake hitting shore put me to sleep quickly.
The peaceful lake woke up angry and traded it’s gentle blue color for a menacing gray.

While we were packing up camp a dark storm powered towards us from the west. At the exact moment I stuffed my tent into it’s ammo can, a rain drop hit me in the face. Then as I jumped on my bike and started it, a few larger drops hit me. The second I started riding out towards the main road the thick wall of water slammed into my everything. The hundred km ride to Karakul, on the east end of the lake, was rough. Every inch of my body was soaked while both boots filled with water. It was tempting to pull over under cover and wait it out, but at that point there was no sense because I couldn’t get any wetter. Best option was to tough it out for the rest of the way. The one thing I have missed dearly on this trip are some good rain-pants. I’ve tried to find some, but haven’t had any luck. They would have come in handy more times than I can remember. Wet heavy jeans are no fun. When I came back to India after healing up from the accident, I had a nice pair of old snowboarding pants that I was going to pack. I needed to cut down the weight for my checked-baggage because of all the heavy replacement motorcycle parts I was carrying and made the wrong decision to leave them behind.
Karakul is a small town with not a lot going on, but it’s the gateway to some beautiful valleys.  Arashan hot springs are only 30 km away, but half is on one of the worst roads imaginable. A man at the guesthouse said it was a sandy road and a bit slippery. This couldn’t be any farther from the truth. If I could dream up a road that was the exact opposite of sandy, this would be it. In the small village of Ak Suu, a road leads to the right towards the mountains. After a short while, it becomes gravel and follows a river up the gorgeous green valley.

The road isn’t too bad for the first half of the way up to the hot springs, but that changes quickly. Long sections become boulder fields. It’s like riding on a dried river bed of big round boulders and stones. 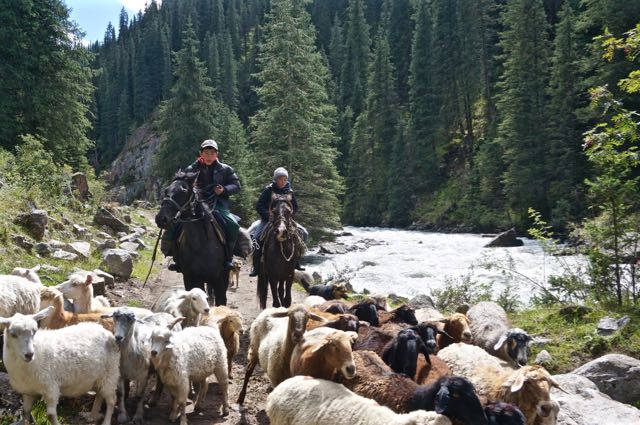 This might have been my closest experience to riding in a rodeo. The incline made it even tougher. I managed to make it about two-thirds of the way up with only dropping the bike once. I came to a steep section that looked like something a rock-crawling Jeep Wrangler would have issues with and threw in the white flag. I really didn’t feel like breaking anything on my bike up in the hills and after watching Harley burn out his clutch trying to make it through a boulder field, I was a bit more cautious. A much better time sounded like finding a camping spot along the tree-lined river and enjoy the warm sunshine.

Best decision ever. The only other people up there were a few hikers making their way to and from the hot-springs. Ben and Sofee ended up passing by and joining me for the night.

Ghi Ghi had made it to the hot springs, but busted both her mirrors and a tail-light in the process. The next best thing to sleeping next to the sound of an ocean, is a flowing river.

The north-side of the lake was calling and I made my way around until I saw a small beach on my map that was away from any cities. Down the hill from the small village of Korumdu is a beach backed by tall trees. Just back from the small community, the mountains emerge and become snowy on top. I set up a camp at the beach and hung out for the afternoon. 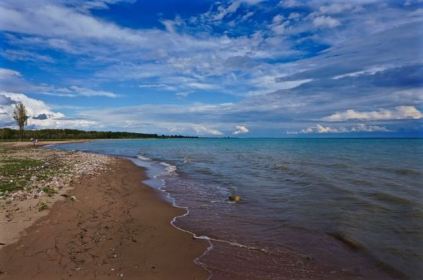 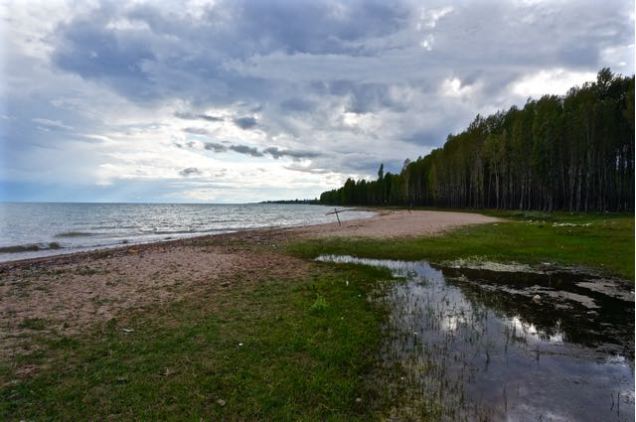 Most of it was spent with a young kid from Bishkek who was with his family at their lake house. He spoke descent english and was eager to chat me up. We swam and laid around the beach with his family.

They wanted me to come stay in their garden, but my heart was set on camping on the beach under the stars. There was another family on the beach, but I hadn’t talked to them. A couple of the girls had walked by a couple of times and studied me. 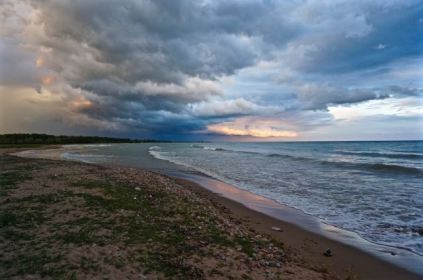 When the last bit of light was disappearing from the day, a woman’s voice said something outside my tent. Her and a young guy wanted me to come up to their house and have some dinner. It wasn’t hard to twist my arm into some home-cooked food. They led me up through the forest to the house and into a dinning room full of people. Everyone warmly welcomed me in.

The men automatically started pouring vodka shots and the women piled food in front of me, and it just kept coming. As soon as a bowl was half empty they would fill it up and when my shot glass was dry another round was immediately poured. W made many cheerful toasts to Putin. It was a group of family and friends hanging at their vacation house for the week. 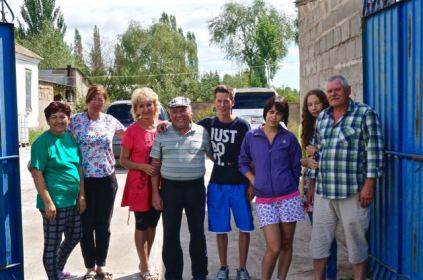 They all live in Bishkek, but a few had Russian passports, and all of them could pass for Russians. The mother of the house insisted I go immediately and gather my stuff from the beach, and stay at the house. They even gave me my own bedroom. The young boy spoke a tiny bit of english and everyone else knew only a few words. Luckily vodka is a universal language and we stayed up late trying to communicate and laughing. The next morning I groggily joined the breakfast table and the man of the house proceeded to pull out a new bottle of vodka and pour shots. A few of these, along with an amazing spread of food, quickly dispersed any hint of a hangover. 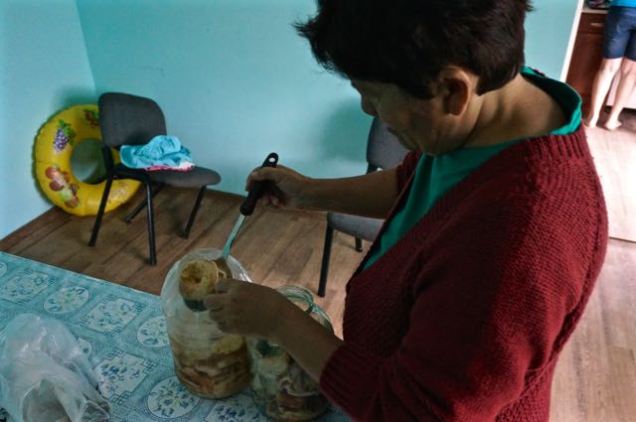 The day went from there and we were off to the lake for a morning swim. The rest of the day consisted of playing at the beach, drinking, and eating. We were able to communicate a lot more through google translate. The sisters spent a couple of hours putting my hair into a zillion little braids.

I felt like the men of the house lost a little bit of respect for me after that. That night we had a serious feast accompanied by the usual bottles of vodka. As the night went on they all started singing Russian songs and just when the place was about to burst, we all went outside in the driveway for a dance party. They blasted Russian hip-hop and classic music from the car stereo. This went on late into the night until the women drug the men to sleep. If there was video of these shenanigans it would be priceless.

After a final delicious breakfast, we said our goodbyes and I headed off towards Bishkek, the capital of Kyrgyzstan. The couple of days I had with them are my favorite kind of traveling. It’s always a blast to get taken in by a local family.

I counted the vodka bottles that we had gone through in the two days and I saw eight. Good times.

A pretty drive along the lake and then up to the north-west brings you into Bishkek. Next up, Kyrgyzstan Independence Day. 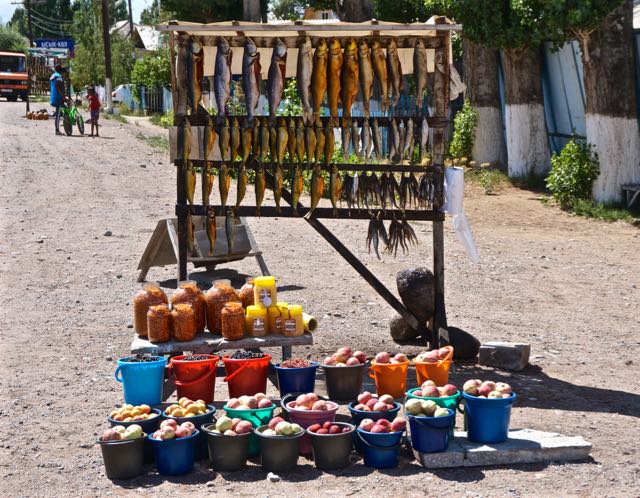