Posted on April 10, 2016 by Trueworldtravels 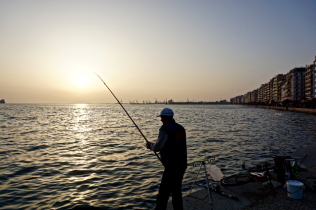 The ride towards the Kulata border in southwest Bulgaria is beautiful. Meandering through wide valleys, snowy mountain ranges tower up in all directions. In the SW of the country, the Rhodope, Pirin, and Rila mountain ranges all sprout up and become obstacles to Greece. 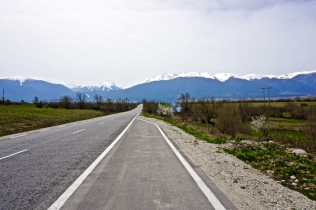 I was given one final gift from Bulgaria before leaving. While cruising at 60 mph a kamikaze bee bombed into my chest just above my shirt. I have to give him credit, it was some good aim at that kinda speed. Ten minutes later, while pulled over and looking at the welt in my mirror, he struck again and got me twice in the belly. I always get a bit freaked out now after almost dying in the middle of nowhere in the New Zealand mountains from a wasp.

After one last delicious meal in Bulgaria it was time to head into a new country. 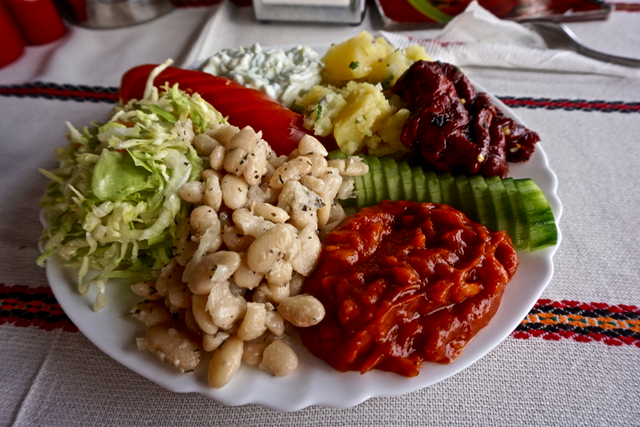 One great thing about getting into Europe is that crossing borders is a whole lot easier and faster. A couple of minute stop at the Kulata border and I was on my way into Greece. It was late in the day so I headed towards a lake on the map. Greece is ahead of Bulgaria in the race for spring. Everything is green and blossoming. Just outside the tiny village of Megalochori, I found a fenced in picnic area near Kerkini Reservoir.

An old farmer was filling up water jugs at the faucet. His tractor and trailer looked older than him, but still rumbled like a beast. With hand signs, I asked if I could camp inside the area. He gave me an “of-course no problem” nod and a hand gesture straight out of a mafia movie. If there were words behind it, I would imagine it something like, “this pasta is amazing Luigi”.

As dusk approached, a few other old guys slowly peddled down the dirt road on rickety bicycles giving me a warm nod of the head. Throughout the village, the electric poles were topped with massive White Stork nests the size of an ospreys. A quick hundred KM ride south of Megalochori is the second biggest city in Greece, Thessaloniki. I got in on a Sunday so virtually everything except for cafes, bars, restaurants, and small corner shops were closed, which was fine. All the people are outside along the waterfront and in cafes enjoying time with family and friends. 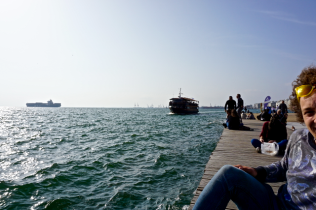 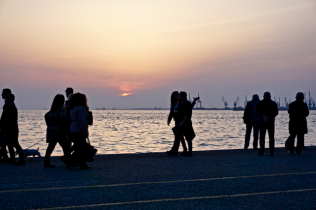 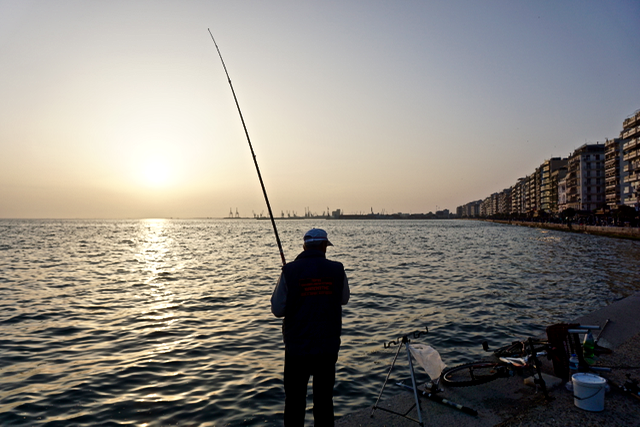 It’s a University town so there’s a lot of young people, and there’s a great vibe to it. One thing I noticed was nobody was face down in their phones. Everybody was heads up talking with people or just enjoying what was around them. It seems like in a lot of cities you walk around with a bunch of zombies and it’s an empty feeling. Thessaloniki feels alive. As you head away from the waterfront, the city changes into old Roman and Byzantine ruins, churches, and steep narrow cobbled streets leading through unique neighborhoods of tiny balconies, all tied together with graffiti. 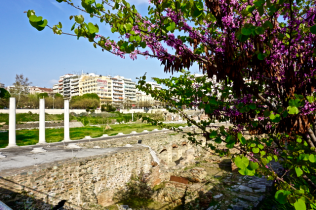 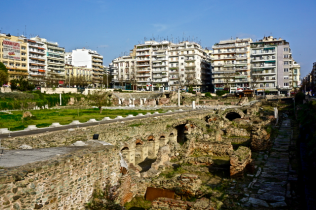 I didn’t really have a plan or any idea where to go in Greece. I was just looking at the map and deciding each day. As I was leaving the hostel in Thessaloniki, a French guy told me about a supposedly beautiful peninsula to the south that he’d read about. So Pelion Peninsula became my next stop. I found out that the motorways in Greece have a crazy amount of tolls and they aren’t cheap. There’s always a way to bypass them with secondary roads though, and they’re always prettier and more enjoyable to ride.

From the city of Volos a steep road full of switchbacks leads over the middle of the peninsula and down to the east coast.

The rocky terrain is covered with wild olive groves, fruit trees, oak, chestnut, beech, eucalyptus, and oak and drops sharply straight down into the Aegean Sea. The eastern half of the peninsula is the more rugged and dramatic of the two.

As spring sets in, the fruit trees are blossoming with whites and purples. Narrow roads drop you down into small villages along sandy and rocky shoreline. The turquoise water lies still as glass and the cream-colored stones shine from below. Local fisherman in their small boats come in and out of the tiny harbors.

Going back to 5,000BC, the Pelion peninsula holds the first organized prehistoric settlements. Pelion is the homeland of the Centaurs and Chiron, Jason and the Argonauts, Achilles, and a bunch more heroes of mythology.

I ended up in the tiny village of Agios Ioannis. Their tourist season only runs from May to mid August and the rest of the year is empty except for the locals who call it home. Apparently it’s packed during these months, but in April it’s deserted. The hotel and guesthouse owners were slowly cleaning up their properties and getting them ready for May.

The one campground was still locked up. It’s similar to when I was on the Turkish coast in November, but even more dead. The weather is absolutely perfect and I found my own slice of heaven. I rode to the end of the promenade along the beach, which is backed by nice accommodation. I spotted a guy at one of them and asked if it was a problem to camp out front. None at all. I got an ocean front room on a private beach that I could roll out of bed onto. 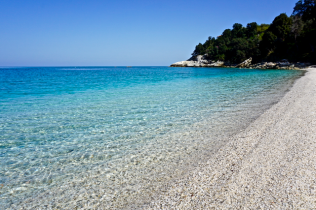 There’s nothing like sleeping to the sound of the soft sea brushing against the shore and waking up to an orange sun reflecting off the water in through your door. 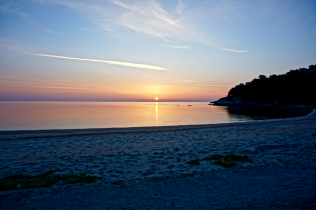 I wouldn’t take one of the rooms for free if they asked. Or maybe I would.

The simple life is good for the soul. Sleeping on the ground, living on pasta and coffee from a little stove, collecting beach glass, strolling around the village talking with the locals, and not having a clue what the news is out in the world. One night was definitely not enough so I posted up for a couple, and could easily have stayed more. Little coves hid around rocky outcroppings.

On the second night, I went and hung out at the little supermarket to have some beer. A lady walked up and started speaking German to me until realizing I was confused. She had seen me on the beach collecting beach glass and was laughing about it. She found it amusing that I was walking around on the rocks barefoot and that now I was wearing flip-flops in the cool evening. I was introduced to the husband, and before I knew it, I was riding with them to get a tour of their house. What an incredible view. In the bottom right hand corner you can see my little tent on the edge of the beach.

They were super nice and invited me for dinner and drinks. He was 77 years old and had some really interesting stories about Germany. He was six years old when the war ended and remembers getting chocolate and sweets from the American soldiers.

His wife’s family was split up when the Berlin Wall was built and it was interesting hearing her memories from that time. Both of them never imagined the wall ever coming down. Good times.