Posted on April 25, 2016 by Trueworldtravels 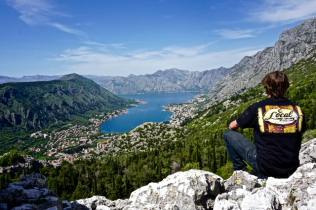 Montenegro, or Crna Gora (Black Mountain) packs a massive amount of beauty into a tiny country with everything from high mountain peaks and karst to a beautiful coastline. Wedged between Albania, Kosovo, Serbia, Bosnia, and Croatia, Montenegro was part of Yugoslavia and has a history of close ties with Serbia. Even after the other former Yugoslav states had found independence, Montenegro was in the form of a state union with Serbia until 2006 when a referendum narrowly decided on independence. During the Bosnian and Croatian wars, from 91-95, Montenegrin military and police joined Serbian forces.

I crossed at the Muriqan-Sukobin border outside of Shkodra, Albania, which heads towards the coast. For the first time, after crossing around fifty borders, the police weren’t happy with my registration copy. They demanded the original, but all I could say is “it’s at home to be safe”. After some very disappointed looks and a fifteen minute wait they shooed me off. I rode into Montenegro on a gorgeous day without a cloud in the sky. Oh how I would miss this soon.

Like Albania, this part of the coast has beautiful grey mountains dropping down to the sea. They’re painted with lush green slopes and filled with orange tiled white houses with million dollar views. It’s built up more than the Albanian coast. 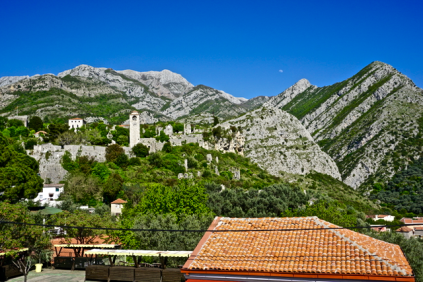 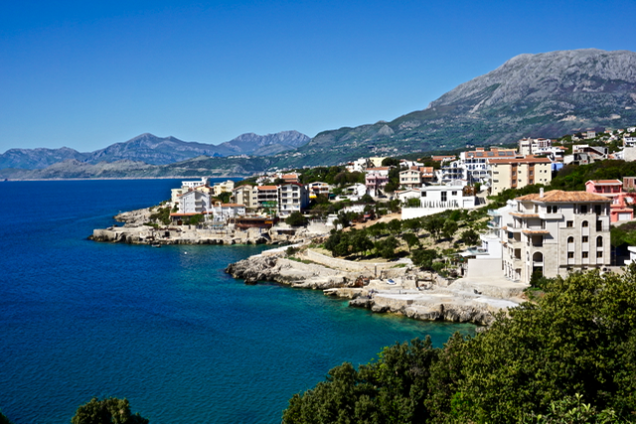 One of the only beaches I came across that was virtually empty was Buljarica beach. Most have been developed, but for some reason it remains a perfect little paradise along the Adriatic Sea. A 2 km stretch of sandy beach is unique, while most along the coast are pebbly. Apparently, in the next few years Buljarica will become a luxury tourist development, which is super sad, but I’m glad I got to see it before this happens. I’m not sure how this untouched gem stayed untouched for so long. Another one bites the dust.

I ended up building a little fort and making a friend for the night. He was pretty awesome except for barking at every movement in the night. Reminded me of my grandparents dog missy. 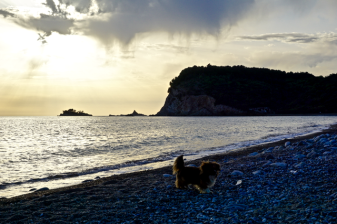 An older German couple camped near me in their nice traveling home and the guy came over to give me a sunset beer. They also let me charge my stuff. A couple young local guys came down and shared a magical joint with me to end a pretty day.

Epic light rays filled the sky until the glowing orange sun faded away behind the tiny island church off the point. 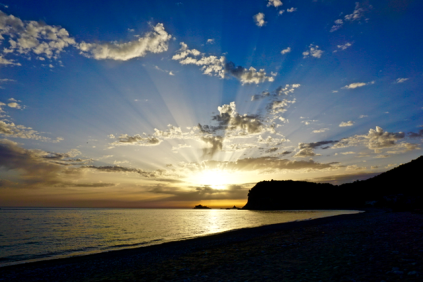 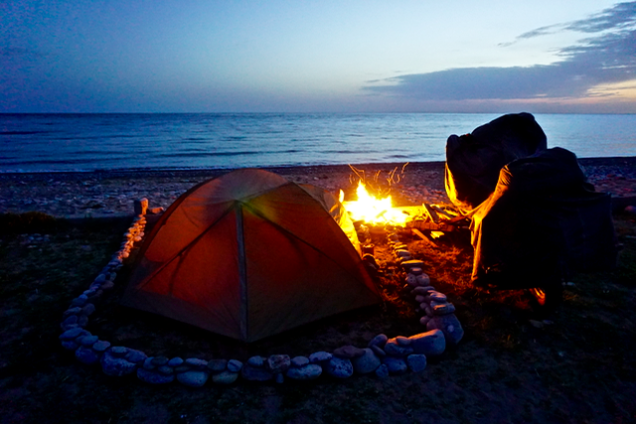 More nights should have been spent, but instead I made my way up the coast. 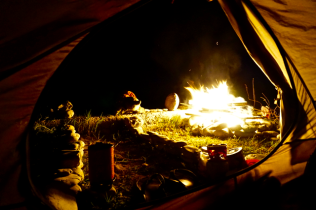 In the north, before entering Croatia, the massive Bay of Kotor enters off the Adriatic Sea and creates one of the most beautiful places I’ve ever been. Small Midlevel towns line the shores. The Orthodox Christian religion brings many churches and monasteries.

A small road leads you around the edge and through cute villages where life slows down. 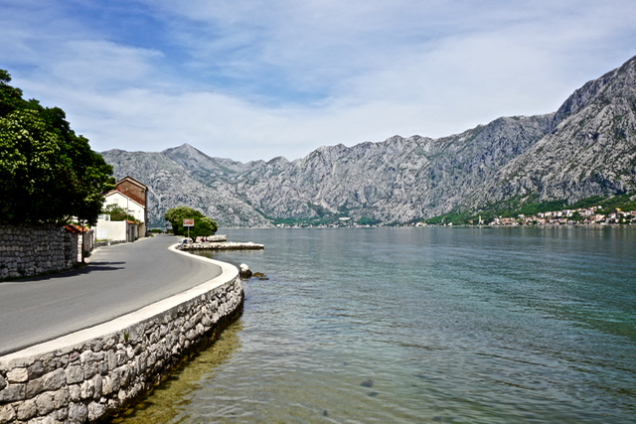 Years ago, I rode a bicycle up the 25 switchbacks that take you to the top of the mountain and Lovcen National Park. It was one of the most breathtaking views I had ever seen, and was even better the second time. Maybe because I got to ride a motorcycle up and enjoy it a bit more. The twenty-five switchbacks are marked one by one at each corner, letting you know how many you have left, which sort of taunts you when riding a bicycle. 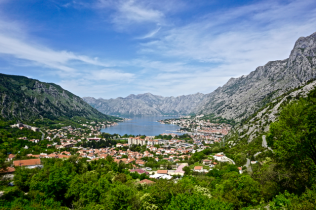 Up a side road along the way is Fort Gorazda. Built in the 1880’s, it replaced an older structure. The coolest feature is a 100-ton Gruson rotating turret on the roof, which is the final remaining example of its type.

It was used by Austrians in artillery duels with Montenegrin batteries on Mount Lovcen during the First World War. The Montenegrins couldn’t destroy it and were pushed out in 1916 by the Austrians. Damage to the fort was fixed and the guns were removed for the Austrian field army. Later on, it was used by the Yugoslav Army as a depot until the early 1990s when it was abandoned. It was the perfect position to see out over both portions of the bay and surrounding area. Passageways lead around through the inside to barracks and fortified rooms. 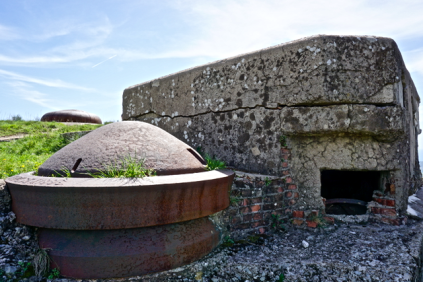 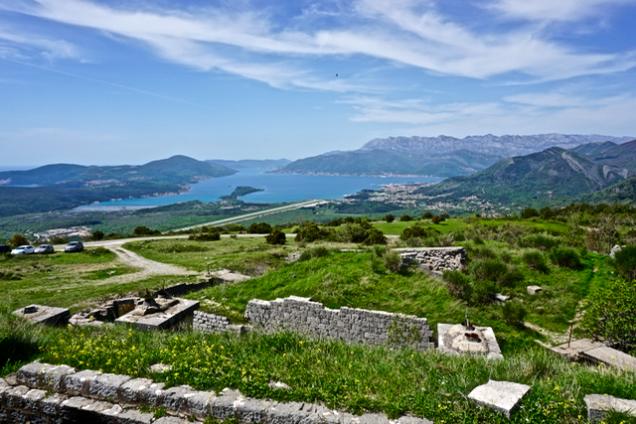 In the little watch tower, two openings each give direct watch over the inside and outside sections of Kotor Bay.

The views get better and better as you climb towards the top. Slowly, the green mountain splitting the bay doesn’t look so big anymore and you’re looking down over the top of it. 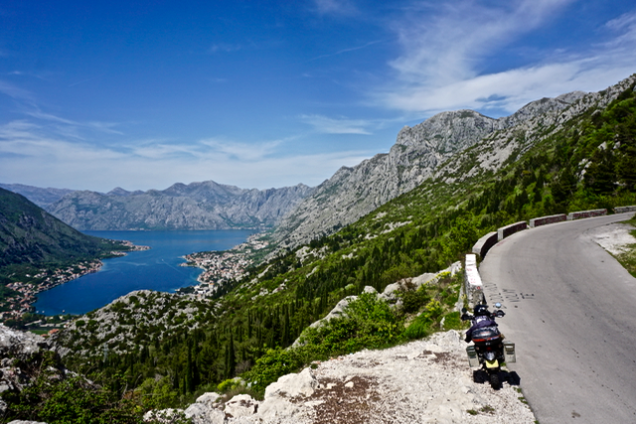 It has to be in the top 5 most spectacular views in the world. 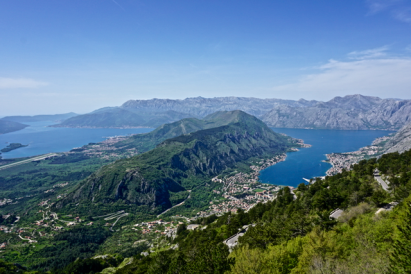 After the final switchback, the road passes through a small tunnel and takes its final rise up to the top where the entrance to Lovcen National Park is. Continuing on takes you into a bowl-shaped valley surrounded by mountain peaks before wrapping around another set of switchbacks. Njegusi village is the birthplace of the Petrovic Dynasty, which ruled Montenegro from 1696-1918, and is full of folk architecture. The karst above the Bay of Kotor has some of the highest rainfall in Europe.

The other side opens up to a rugged limestone landscape. During the last ice age, Montenegrin mountains were some of the most ice-eroded on the Baltic Peninsula. The landscape in beautifully raw and desolate in many places. It feels far away from the rest of the world. 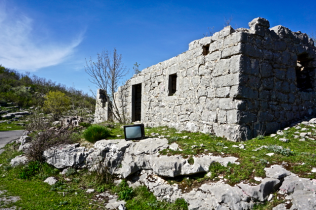 Randomly, tiny villages and homesteads show up over small ridges and bends in the road. Down in small valleys, people farm a life in the harsh terrain. Bright green fields surround clusters of simple stone homes with tiled roofs.

Spring hasn’t quite set in as much as down lower and the trees buds are just beginning to sprout their fresh leaves and colorful flowers.

The route comes out along Slansko Lake just outside Niksic. It’s a nice area surrounded by beauty. Home for the night became a big grass meadow by a church sitting atop a small rock outcropping. It has to be good luck camping next to a church. It felt like the whole area had been manicured by a mower. The fancy work of cow’s, sheep, and goat’s mouths. 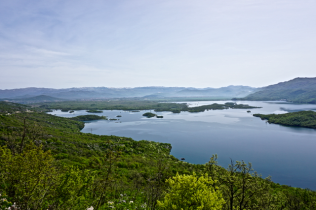 It was a quick skip through Montenegro before heading to the border with Bosnia. 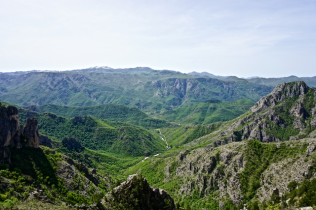